Why do I write Cozy Mysteries?

Because I love writing sweet, slightly romantic stories with a mystery to solve that allows our main character to interact with her community and invite them to help her solve it. I like building worlds and seeing how each of the separate characters adds color and flavor to the overall recipe!

I currently have two cozy mystery series available: Danger and Donahues and Enchantingly Yours: Season 1

Danger and Donahues is a sweet cozy mystery series that revolves around the Donahue’s and their extended family. Set in Texas, the mysteries are bigger, the villains are badder and the women are bolder! The first three books revolve around Donahue brothers. The fourth book, which I’m currently writing, will finish up the brothers (the twins!) And later this year or early next, I’ll start on the Donahue sisters’ stories! 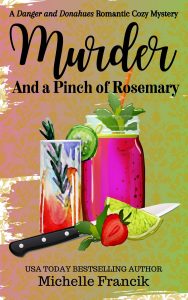 Book 1 of the Danger and Donahues series

Murder and a Pinch of Rosemary is a sweet romantic cozy featuring Susan, a WITSEC witness, Reed Donahue, a US Marshal and his partner and sister-in-law, Maggie Donahue. When strange things start to happen, Susan fears the man who committed the murder she witnessed has found her. When notes appear threatening Reed, Susan wonders if Reed is keeping her safe or if she’ll have to keep him safe. With twists and turns, laughter and tears, this story will keep you guessing–and rooting for Susan and Reed! 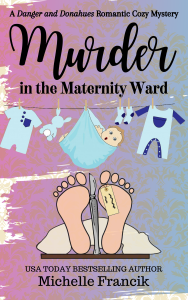 Book 2 of the Danger and Donahues series

Murder in the Maternity Ward is a fun romp that picks up where Murder and a Pinch of Rosemary left off for Maggie Donahue. When a murder happens literally over her head, a very pregnant Maggie joins forces with a new friend, Ashanti, and–against her husband, Garrett Donahue’s, wishes–investigates the mystery.  As their friendship develops, their due dates get closer. Will they be able to solve the murder before they deliver their babies? And why is Adam Donahue hanging around? You’ll have to read the book to find out!

Book 3 of the Danger and Donahues series

Murder in the Houston High Rise finds Ashanti and Maggie, and their new babies, on the farm. Adam Donahue invites Ashanti to his high rise apartment and when she overhears Maggie and Garrett talking about needing some privacy, she accepts. But soon, things take a dark turn. When a dog with bloody paws shows up, a scary thug is not far behind. Will Ashanti and Adam solve the mystery or will the bad guys win? And what is really going on between the two of them? Stay tuned to find out!

The fourth book in this series will feature the Donahue twin brothers. When a customer at their gym turns up dead after an argument, the brothers are in trouble. Can they find out who actually committed the murder before the sheriff arrests them both? Can they save the gym?

Enchantingly Yours: Season 1 is a paranormal cozy mystery with elements of romance! There are four books, each featuring a different main character–one of the Four Rich Witches. When Stella learns about a Dating Reality Show that will be filming at the family home that was stolen from her great-great grandmother, she get the gang together to do some magical sleuthing while pretending to be dating a rich guy. Magic and mayhem ensue, but will they solve the mysteries and get the guys? Or is history going to repeat itself?

Note: Each book covers the same dates and events, just from a different character’s perspective. This means that there is some repetition. But each book delves deeper into the main characters’ lives and more mysteries and events are uncovered. 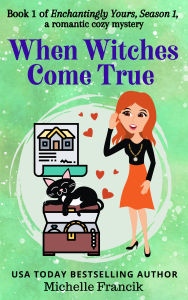 Book 1 of the Enchantingly Yours: Season 1 series

When Witches Come True is Stella’s story. She’s determined to find out what really happened so long ago. But along the way as murders and infidelity are uncovered, will she be able to handle the truth? 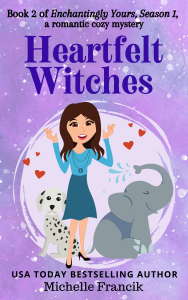 Book 2 of the Enchantingly Yours: Season 1 series

Heartfelt Witches. Fiona has always put her family’s status and appearances first. But she’d really like to find someone who’s interested in her as a person–not just a path to money and influence. Is the rich guy the man for her? Or is it someone else she’s dreaming of? 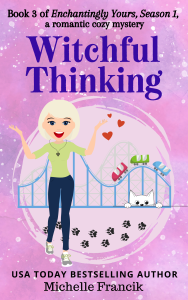 Book 3 of the Enchantingly Yours: Season 1 series

Witchful Thinking. Poppy always tries to stay positive and be supportive. But sometimes she just wants to relax and not have to work so hard. Why do people always underestimate her? Is it because she underestimates herself? What happens when her date shows her a side she didn’t know she had? 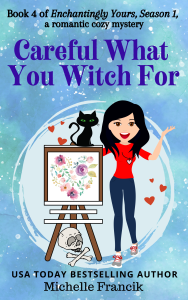 Book 4 of the Enchantingly Yours: Season 1 series

Careful What You Witch For is Raven’s story. Sarcastic and borderline rude, she always feels like she’s out of the loop. But she’s needed and valued more than she realizes. What is it she’s hiding? What’s she so afraid of?

Manage Cookie Consent
To provide the best experiences, we use technologies like cookies to store and/or access device information. Consenting to these technologies will allow us to process data such as browsing behavior or unique IDs on this site. Not consenting or withdrawing consent, may adversely affect certain features and functions.
Manage options Manage services Manage vendors Read more about these purposes
View preferences
{title} {title} {title}